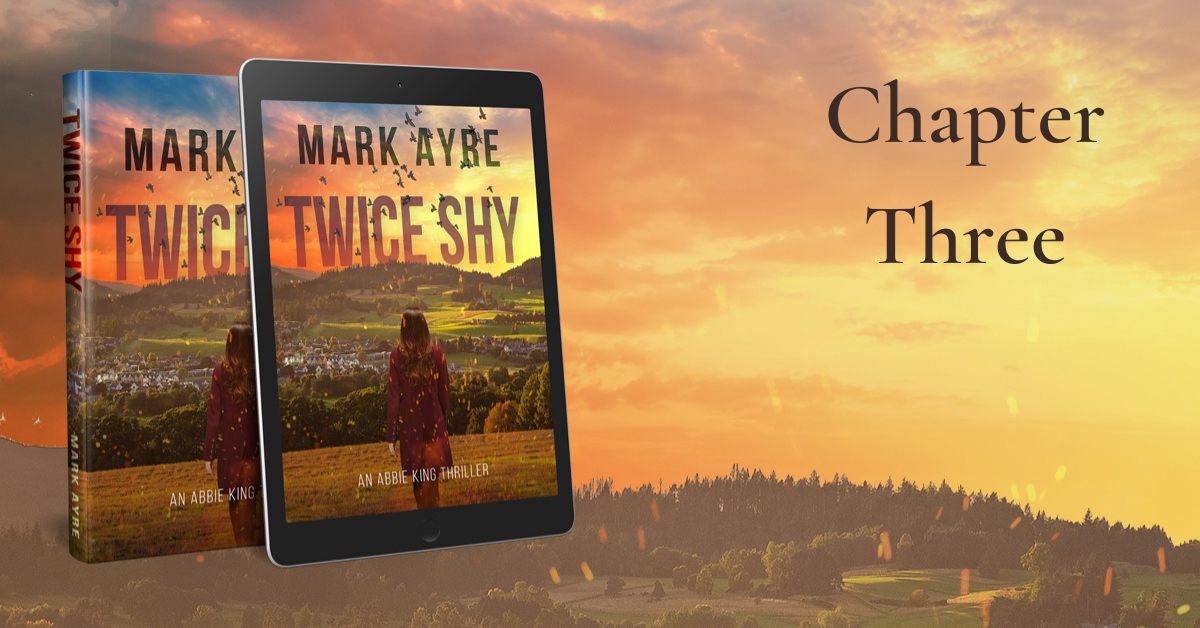 Showing no signs of recognition—only mild interest at who this gatecrasher might be—Harry opened his mouth to speak.

Before he could utter a syllable, a pale hand grabbed his taut bicep. The teenage girl of Abbie’s dream was tugging at the monster, pulling him back.

Harry kept his eyes on Abbie a few moments more, even as the teenager tugged at him with desperation. Then he gave Abbie a nod as if to acknowledge something she had said, though she had not spoken, and turned away.

The doctors had told Harry he would never walk again. But doctors were human and therefore fallible. Harry’s doctors might have been wrong, despite the staggering sums Ian had paid in his efforts to restore the power of working legs to his eldest son. Fourteen years was also a long time in medicine, and Ian was clearly still rich. Maybe the doctors were right in 2007, but some new surgery or method in the intervening years had restored to Harry the ability to walk.

The girl still had her hand on Harry, and now they were moving away. Walking away. But it was not the walking with which Abbie had a problem. Not really. It was the age. Abbie did not believe in the supernatural and knew of no medical procedure that could turn back Harry’s biological clock until he was eighteen again.

It wasn’t possible. Of course.

Harry and the girl had reached the patio, and it seemed with every step they took, the fog in Abbie’s mind reduced a little, and she thought a little more clearly. The clarity of thought brought Abbie the answer that should have been obvious from the second she saw the young Harry’s face.

This was not Harry, but his much younger brother. A boy who had been only a kid when Harry had raped Abbie and who had grown into a replica of his sibling.

Not an exact replica either. Dark memories had polluted present perceptions for Abbie. As she had already been thinking of Harry, the mere resemblance to him of this younger model had been enough to trick Abbie’s mind. Enough to make her believe she saw the impossible. This boy was taller than Harry had been, with a flatter nose and slightly broader shoulders. They were similar but even had they both been eighteen, they were easily distinguishable if you were paying attention. If memory was not corrupting perception.

The teenage girl disappeared into the house, and Harry’s younger brother followed. Furious at herself for once again allowing her past to overwhelm her and affect her actions in the present, Abbie took a step towards the door.

Only for a cold hand to snatch her wrist and drag her back.

Taken by surprise, Abbie stumbled into the clutches of a lanky teenager with a narrow face and beady eyes. They, the eyes, were suspicious. But his smile was that of a hungry wolf who has spied a tasty rabbit. No, that wasn’t right. A hungry rat that has spied a delicious… whatever it was rats ate.

So here was the confrontation, and of course, it came at precisely the wrong time. Harry’s brother had disappeared into the house with a potential victim, and Abbie needed to pursue. Instead, she was stuck here.

“Who I am is Abagail,” said she. “What I’m doing here is being held against my will, getting quickly pissed off, and wondering if it’s worth the effort breaking your arm if you don’t let me go, or if I should go right ahead and put my knee into your special place.”

The boy could not help but cross his legs at this. He did not release Abbie’s arm. She was content to let him have it a little longer before she reacted to this personal space invasion with violence.

“This is a private party,” said the kid.

The teen flushed. His grip tightened around Abbie’s wrist to the point where she could actually tell he was applying pressure.

“You ain’t welcome here if you weren’t invited,” he said. “You got to leave.”

“But I was invited,” said Abbie.

Abbie had a split second to make a decision. She could have twisted his wrist and put him to the ground or even kneed him in the groin, as she had threatened. She would not have broken his arm, but there would be no trouble shaking him off.

Instead, she said, “Harry Delaney. I’m a friend of the family.”

Momentarily surprised by the use of Harry’s name, the rat looking boy wasn’t sure what to say. Pretending not to know what to say herself, Abbie let him compose himself.

“Why would Harry invite you to a party where he weren’t going to be himself?” was the guy’s eventual response.

Abbie smiled what she hoped appeared to be a knowing smile.

“What’s your name?” she asked.

The guy hesitated. Unsure whether to answer. Abbie noticed that his hand, initially chill, had grown warm around her wrist and was now beginning to sweat. It was repulsive, and she tried to ignore it. Abbie wasn’t yet ready to shake the moron off.

“Brian,” he said at last, and Abbie could see he was telling the truth. She nodded.

Brian’s eyebrows raised. Before he could question this statement, Abbie went on.

“Harry sent me to talk to his little brother.”

Abbie was good at reading eyes, and she saw alarm in Brian’s. The kind of alarm that came from recognition. Abbie was making her story up on the spot, but it was clear the prospect of Harry sending someone to talk to his little brother was nerve-inspiring. Ian’s youngest son was keeping something from his eldest. In other words, Abbie had struck gold.

“I suggest you release me,” she said. “If you don’t, there’ll be plenty of pain in your future.”

Brian’s mind was working over what Abbie had said and was trying to decide what course of action he should take. Unfortunately, Brian’s did not appear to be a particularly sharp brain. He took some time to get to that fabled decision.

How long had it been since the teenage girl had led Harry’s brother into the house? Were they in the living room, trying to talk while surrounded by druggies and couples and booming music? Abbie doubted it. Far more likely that they had gone upstairs, and nothing made Abbie more nervous than that.

Her tone was hard and sharp like a steel blade. Fear entered Brian’s eyes, but he shook his head as though he had forgotten how to unclench his hand.

“This is pointless,” he said. “I know what Toby will say.”

Toby Delaney—yes, Abbie remembered the name now, though it had been years since she had heard it, and she had never met the boy or even seen him before tonight.

Abbie wanted to understand what this tension between Harry and Toby might be. What Toby planned on doing that Harry would like to stop. But Abbie was supposed to know already. Asking follow up questions would give the game away.

“Except I think he is afraid,” said Abbie. “And you certainly are. Which shows that you’re sensible. You should be frightened. But you have nothing to fear for the moment, so long as you release my wrist.”

Brian was quaking. He was not used to being the big man or pushing people around. Still, he had got it into his head he was doing the right thing.

“Damn, Bri, that was super sexy. Can you say that again?”

Brian’s face flushed. His eyes flicked up and down Abbie’s body. Aside from being tall and slim, with a figure earned by many hours spent in the gym and on the running track, Abbie was also an attractive woman—or so she had heard it said. Even if she had been so-so, Brian’s experience with women was no doubt limited, and Abbie was more than a decade his senior. Teenage boys were often into that. Gushing, Brian fell entirely into Abbie’s words.

“‘Fraid I can’t do that,” he repeated. This time, he tried to put a drawl on it, like a cowboy. It made him sound simple.

Brian’s eyes widened. His hand loosened involuntarily. Abbie punched him in the stomach, slipped free from his grasp, and tripped him as he folded.

Getting Brian to loosen his grip had meant Abbie only needed to tap the stomach. Nothing that would leave a mark or that would hurt by morning. Tripping him into the bush would cause nothing more than embarrassment. Regardless, she felt sorry for the lad. Also guilty.

Brian grunted something, but Abbie didn’t hang around. Turning, she abandoned the attacked teen and headed back towards the house. Towards Toby and—perhaps—towards her second physical altercation of the night.

Tap here to buy Twice Shy from Amazon now, or click below to keep reading.

International worst-selling author Mark Ayre has been writing since before he could pick up a pen (somehow). An author of mystery and suspense novels including the James Perry Series of mysteries.