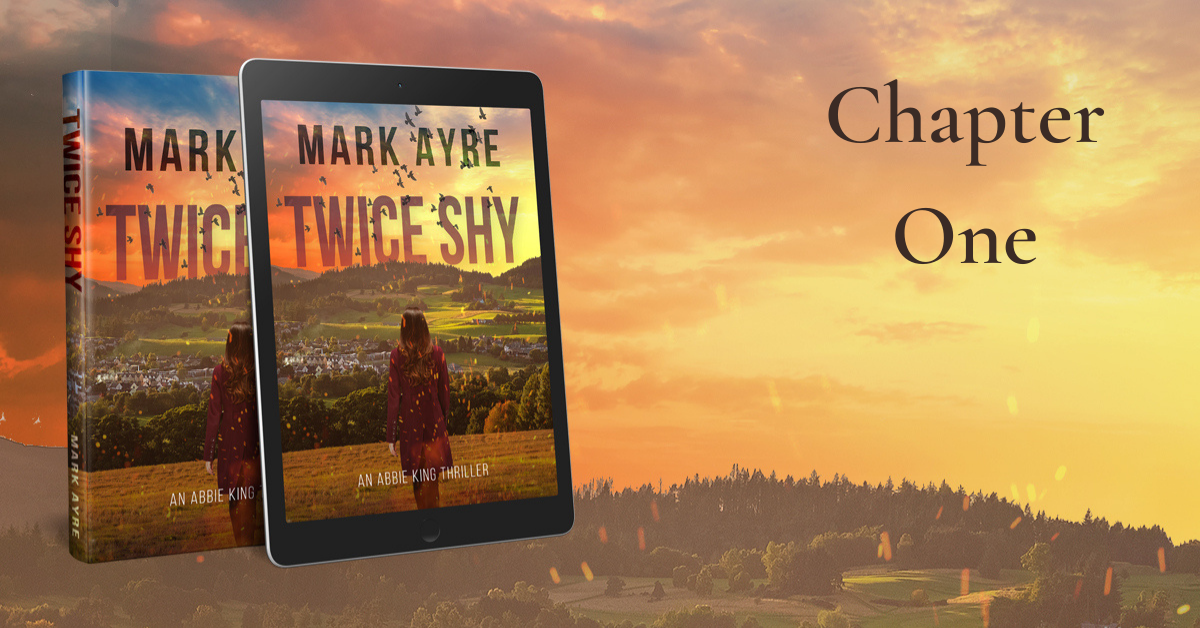 It was as though the locals had erected an invisible shield around their town, designed to deter outsiders from entering their precious space.

The shield attacked the brain. The moment Abbie swept past the town’s WELCOME TO sign, the instant she glanced at it and registered the name, she felt waves of nausea overcomer her.

A second later, seemingly of its own volition, her foot was smashing the brake pedal.

The car began to scream as though the breaks were implements of torture, and the vehicle was in agony.

The wheels stopped spinning, but the car hated to stop rolling. The steering wheel tried to tear from Abbie’s hands as the vehicle turned side on and squealed its way along the tarmac, away from the welcome sign, towards town.

After several seconds of this screaming scrape along the road, the car stopped with a jolt. Abbie’s shoulder smacked the window. She was aware of a throbbing in her wrists following the strain the struggling steering wheel had put them under.

This pain was nothing when compared to her spinning head and churning stomach.

Now the screaming had stopped; the night was silent. It was shortly after two o’clock on a mid-June morning. Thankfully, the two-lane road leading into and out of town was deserted. At least for the time being.

Trying to keep calm, Abbie glanced back towards the welcome sign. She had travelled far enough that she could no longer make out the town name. Not that that mattered. She could see it, glowing like a neon sign, in her mind. Here came another wave of sickness.

This time a tidal wave.

For years, those who met Abbie knew her as stoic, measured, and emotionally closed down. Recent times had changed her. When Abbie had woken in the dark a little over two hours ago, the face of an innocent stranger facing grave peril in her mind, she had not been alone in her house or in a hotel room. For three months, she had been staying with Alice Rayner and several of Alice’s children. Abbie had saved Alice’s life, and over the last few months, the two women had become close. Alice was sixty, Abbie approaching thirty. To Abbie, Alice had become something of a mother figure.

All of which had served to open Abbie up emotionally. If she was a nut, Alice’s care had cracked her. The heart she had once hidden was exposed. For the most part, this was good.

The tidal wave hit—a swell of negative emotions that manifested physically and which Abbie’s calm, measured breathing could not deter.

When this became clear, Abbie threw open her car door, unplugged her seatbelt, and spilt rather than stepped onto the road. She barely had time to reach the roadside before the emotion became vomit which brought Abbie to her knees as it escaped her.

Emotion could be a beautiful thing.

In times such as these, Abbie remembered fondly her life as an emotionless robot.

Once Abbie had thrown up, controlled breathing allowed her to better control herself and to overcome the churning in her stomach and the pounding of her heart.

There was no invisible shield around the town. Abbie’s suffering was psychological.

When Abbie’s dream had woken her at midnight, she had got up, showered, prepared and drank a black coffee, left a note for Alice, and driven into the night.

As always following such a dream—one which left Abbie with the strong impression of an innocent person on the cusp of demise—Abbie drove without recourse to maps or GPS. She took turns at random, with no specific destination in mind. No vague one either.

The face of the innocent stuck in Abbie’s mind like chewing gum in her hair. That face was Abbie’s compass. As long as she could see it as she drove, Abbie was sure to arrive where she was needed.

Not knowing where she was going was usually not a problem. Abbie was used to being a stranger in a strange town.

In this instance, it had left her unprepared for the emotional onslaught of memory that greeted her upon arrival.

Abbie rose from the road and breathed in the night air.

Abbie dropped into the car’s driver seat but left the door open. She needed the fresh air.

The night remained still. Fields stretched out on either side of the straight two-lane road. The engine of any approaching vehicle would give Abbie plenty of warning to move her car before a collision could occur. That was good. She wasn’t ready to drive just yet.

The epic novel had always been Abbie’s greatest source of strength. Not because she liked to remind herself that, however bad life got, at least the world had not collapsed in such a way as in the post-apocalyptic world crafted by Stephen King. Instead, because it had been the most precious possession of the person Abbie had loved more than anyone in the world and who she had lost so long ago.

Abbie often needed to draw strength while striving to save an innocent stranger from certain death.

Though not previously so early into the mission.

Still, this was an exceptional circumstance.

Removing the book from the pillowcase, Abbie placed it on her lap. Opening the cover and first couple of pages with extreme caution, Abbie located The Stand’s dedication page. Beneath King’s message to his wife (For Tabby: This dark chest of wonders.), Abbie’s sister had scrawled her name.

Abbie placed her finger over that name.

Looking first back to the welcome sign, then towards the town itself, Abbie took a breath. More than anything, she wanted to start her car and drive away. Two hours and she could be back in the safe embrace of the Rayner family. In that beautiful house by the sea.

That was what Abbie wanted, but it was not possible. Someone was in danger. Their life would end if Abbie did not find the strength to enter this town that had driven her to such a visceral reaction, merely at the sight of its name.

She had to go on. For the strength to do so, she needed her sister.

“Violet,” she whispered while holding her finger to her sister’s name. “I always need you when I’m out there saving lives.” Abbie looked again towards the town. “This time, I’m going to need you like never before.”

Abbie did not believe communication with the dead was possible. She knew speaking with her sister while pressing her finger to a word said sister had written years before she had died was nothing more than a psychological crutch. But that was okay. A psychological crutch was precisely what she needed to deal with the psychological blow the mere suggestion of this town had handed her. By the time Abbie was done, if she survived, a psychological full-body cast might be in order.

She would have to see about that.

A teenage girl was in danger. Abbie’s pain when facing this town was nothing to the suffering this innocent would face if Abbie fled.

Which meant flight was not an option.

Abbie did not believe the dead could feel pride any more than they could feel hunger or an annoying itch on the end of their nose. What she meant was, I will continue to try and be the kind of person I think you would have been proud to call your sister.

Violet would never know this was Abbie’s intention. But Abbie knew. And that was enough.

With as much care as she had used in extracting it, Abbie returned The Stand to the pillowcase and returned the pillowcase to her drawstring bag. This done, she closed her car door and started the engine. A few moments later, she had redirected her car and was once more driving towards the town of her birth.

On that mid-June night, haunted dreams stole sleep from Abbie and drew her home.

She was not the only one.

Having already struggled to fall asleep in the crappy single bed in his crummy temporary accommodation, Carter knew he had no hope of falling back to sleep once nightmares roused him in a cold sweat.

He needed a hot shower but suspected he would have to settle for a tepid one in this dump.

Actually, the water was cold, bordering on freezing.

Carter needed a coffee, but there was only tea. Though Carter hated tea, he needed something, so he prepared himself a cup.

It did not taste good.

Sitting on the creaking, back destroying single bed, Carter stared at the wall and thought of home.

He thought he had decided he was never going back. It wasn’t a good idea. Before long, he would run into one of the people who had wronged him. When he did, he would think of all he had suffered because of them, right up to and including this crappy temporary accommodation. When he saw them, rage would consume him. Carter would see red and, before he knew it, his enemies would lie dead at his feet.

Ending their lives would be satisfying but most unwise.

Going home would be unwise.

Carter had not felt compelled to do so. Then, the dream.

Before he had hit the shower, the dream was breaking apart in his mind, fragmenting into shards that turned into dust. By the time Carter returned to bed with his cup of tea, he could not remember its content at all.

But he was left with an undeniable compulsion to return home. And with a face fixed in his mind.

There was a folded slip of card on Carter’s bedside table. One of his few remaining possessions. He could not stop himself. Taking the card, he unfolded it, revealing a photograph.

His breath caught in his throat, his heart picked up the pace. Looking at her beaming face always had that effect on him.

With one trembling finger, Carter stroked her photographed cheek.

And he knew there was no point fighting it. Forget the enemies. Forget the pain and the memories and everything else. Forget his potential rage and how it could ruin the rest of his life.

He was going for her.

And he was going right now.

Tap here to buy Twice Shy from Amazon now, or click below to keep reading.

International worst-selling author Mark Ayre has been writing since before he could pick up a pen (somehow). An author of mystery and suspense novels including the James Perry Series of mysteries.